This is a dynamic festival, aimed at the latest technologies and towards a public immersed in the digital arts, multimedia, illustration and film animation. Making best use of its online platform, BANG can reach all users and be watched on any screen anywhere in the world.

In our last edition, we consolidated Bang Awards Festival as a reference event on the international circuit. The number of participants (more than 400 films) from all corners of the globe.

From the first, our main objective has been clear: to create a privileged access to inter-film dialogue, as well as between creators and the public. What we have received in return is too precious to be quantified: hundreds of films that have touched us in so many ways. We are delighted with our journey so far and this has energised us to continue this surprising voyage through a world of creativity. Thank you all!

The 6th edition of the BANG AWARDS – International Animated Film Festival, has "CHOICES" as it's inspirational theme. The creators of films that explore this subject will be highly regarded by the panel of judges and the organisers. This is not an obligatory theme, however, it is simply the underlying inspiration for Bang Awards.

Bang Awards Festival is promoted by the Torres de Vedras City Council, produced by Slingshot.pt, organized by Nau Identidade, with the support of A3 - Graphic Arts. 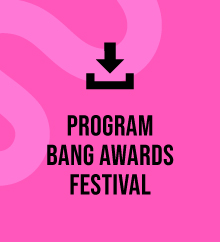